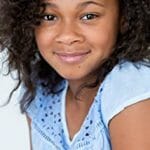 Soleil Patterson has been training in the arts since the age of 6. She has appeared in several short films, national and regional commercials, and television shows, which include her recent appearance on Manhunt: Lone Wold and Fear the Walking Dead. Soleil continues to study Television and Film under the renowned acting coaches, Carol Hickey, Kim Davis, and Marnie Cooper. She has also appeared in several print campaigns, as well as provide voice over for a few nationally recognized companies. She has performed for producer panels for a few Netflix shows, making it to the top 2 selections. She also has experience behind the scenes as a videographer, and learning editing to eventually make her own short films and webseries.